I organized another beer tasting event together with a couple of friends (Kimmo, Marcus L. and Marcus N.) yesterday, and this time we tasted through a total of 21 different beers (we had 24 beers total, but didn’t taste through them all). Out of the 21 beers, 8 were homebrews (one of my own, two from Marcus L., and five that our Swedish friend Ingo had sent us; Thanks for them!). Most of the beers were fantastic and we had a great time. We also had some tasty homemade hamburgers and potato wedges to fill out stomachs between the beers (thanks Marcus L. and Marcus N. for making them!). Here is a picture of the whole line-up: 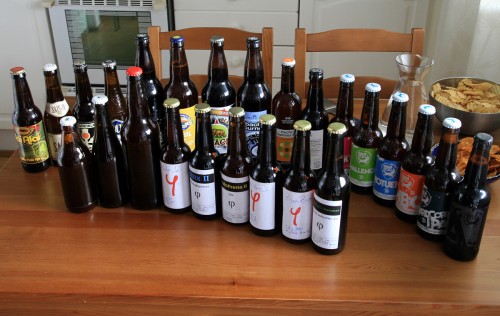 We began the evening by trying out Brewdog’s IPA is Dead series: 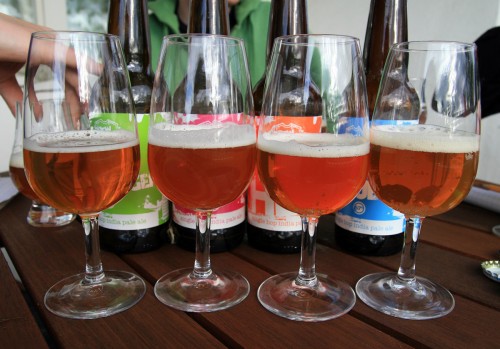 The beers poured with a similar golden-amber color and a slight white head that left some lacing. The Galaxy version was slightly hazier than the rest of the bunch. The Challenger version featured an earthy, grassy and slightly citrusy aroma, that pulled my mind towards ‘English’-style ales directly. The flavor was the least hoppy of the bunch, and you could get tones of caramel, toasted malt and red berries, along with the earthy and herby hoppiness. The Galaxy version had an aroma featuring tones of mango, passion fruit and grapefruit. The flavor was similar, featuring strong tones of grapefruit, citrus, resin and some tropical fruits. The bitterness of the Galaxy version felt the harshest and most present. The HBC version also featured tones of tropical fruits (mango) in the aroma, but had more of a grassy feel. The flavor felt the sweetest of the four beers, and featured tones of citrus, currants and some grassiness. The Motueka version featured tones of dill and lemon in the aroma, and it reminded me a bit of the tones you get from the Sorachi Ace hop. The flavor contained some tones of tropical fruits alongside the lemon which was present in the aroma already. The beers all had a medium body and a medium-low carbonation level. My favorite of the bunch was the Galaxy version.

Next up was a foursome of homebrews (My Citra IPA, and Ingo’s Slinka V IPA, Zum Zum and PraktPretto II): 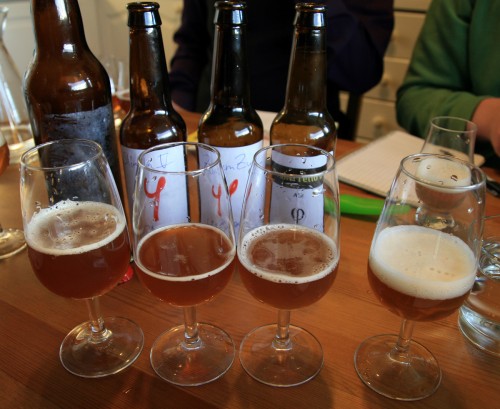 Again the beers had a similar appearance, all being slightly hazy, having colors in the golden-amber range and having white to off-white heads. The Citra IPA featured tones of passion fruits, lychee, mango and some alcohol in the aroma. The flavor began slightly sweet, with honey-like tones, which are joined by hop tones of tropical fruits. The finish is quite smooth and with some bitterness. The beer had a medium body and medium carbonation level. Slinka V IPA featured tones of caramel and ‘fruity bubblegum’ in the aroma. The flavor was quite different, moving towards resiny and earthy hop flavors, and a bitter finish. The beer had a medium body and low carbonation level. Zum Zum was a little strange, as according to the label it should have been a beer with a low IBU but loads of hops (I was expecting a beer in the style of an American Pale Ale), but it felt more like a Hefeweizen. Both the aroma and flavor was dominated by spicy phenols, some banana and yeastiness, which are typical of the Hefeweizen-style. The beer had a light body and a medium carbonation level. I wonder if this was infected? PraktPretto II (an English Ale, hopped with EK Goldings, 5.9%, 30 IBU, 1.055->1.010) featured earthy and grassy tones in the aroma, and it felt very true to the style. There was some cherry in the aroma as well. The began with a sweet maltiness, that was joined by some earthiness. The flavors were well balanced. The beer had a medium-light body and a medium carbonation level. This was my favorite of these three Ingo beers.

After this it was time to try two of Alko’s summer beers, St. Feuillien Saison and Norrebro Pacific Summer Ale, and Marcus L.’s two homebrews (the same Amber Ale base, but fermented with S-04 and US-05): 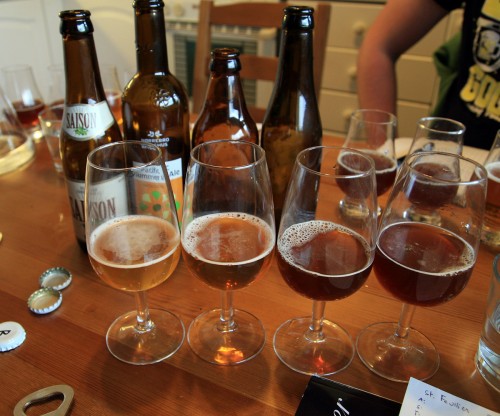 The saison poured golden-yellow with a fluffy white head. The aroma was mostly spicy (Belgian yeast tones), with some slight citrus. The flavor was quite light, with the same spicyness from the aroma and a dry finish. The body was light and carbonation level was medium-high. Refreshing summer beer. The Norrebro Pacific Summer Ale poured golden-amber, with a minimal white head. The aroma contained tones of caramelly malt, honey, and a slight fruity hoppiness. The flavor was similarly malt-dominated, with bready and caramelly flavors dominating, with a slight grassy hoppiness in the background. The finish was quite dry with not much bitterness. The body was medium-light with a medium carbonation level. The “1 AM” ales were amber colored, with slight off-white heads and a oily texture. Both beers had a caramelly and malty aroma, with the British version having some red berries in the aroma as well, while the American version had some ‘dishcloth’ tones as well. Both beers were quite bland in flavor, featuring mostly maltiness and some sour undertones. Both beers had a light body and medium carbonation level. Both were probably passed their prime unfortunately.

After this we started to get hungry, so we cooked up some burgers and potato wedges. While cooking we enjoyed Cigar City’s Jai Alai IPA (unfortunately no picture or tasting notes, but see this post from when I tried it last), full-packed with citrusy hoppiness. After dinner we moved to the heavier beers, and poured up Ingo’s Grabthar’s Hammer (9%, 101 IBU, 1.086->1.018, Amarillo, Riwaka, Cascade, Chinook, and Summer hops), Green Flash Imperial IPA, Southern Tier Iniquity and Southern Tier Backburner:

Grabthar’s Hammer poured with a hazy amber color and a white head. The aroma featured tones of sweet tropical fruits, citrus and slight alcohol (the aroma was similar to his Slinka V IPA). The flavor began with a sweet maltiness, that is joined by tones of tropical fruits and citrus. The finish is quite sweet with a huge bitterness. There are slight solvent tones present as well. The beer has a medium body and medium-low carbonation level. Green Flash Imperial IPA poured with a golden color and a really fluffy and large white head, that collapsed leaving tons of lacing. The aroma featured a sweet citrusy and herby tone, that felt really familiar, but that none of us could pinpoint. Maybe it was tangerine, which Summit hops are known for. The flavor was dominated by hoppy tones of resin and lemon, and the finish was quite sweet and bitter. The beer had a medium body and medium carbonation level. Southern Tier Iniquity (Black IPA) poured very dark brown (almost black), with a off-white head. The aroma contained tones of roasted malt, spices and a slight hoppiness. The flavor began with some roasted tones and caramel, and it was joined by some resiny hop tones and a bitter finish. The beer had a medium body and medium carbonation level. Southern Tier Backburner (Barleywine) poured with a dark amber color, and a slight off-white head was formed. The aroma was nutty, malty and caramelly, and the flavor was similar. The flavor was dominated by very sweet caramelly tones, together with a nutty maltiness and a slightly bitter finish. The beer had a full body and a medium-low carbonation level.

The final beers of the evening were the Imperial Stouts and Porter. Brewdog’s Dog A, De Molen Hemel & Aarde, Bear Republic Big Bear Black Stout and Ingo’s PMX II Sällskapsporter (6.8%, 30 IBU, Magnum, EK Goldings, 1.062->1.010). Fortunately I had read warning notes on the internet about opening the Hemel & Aarde, as when we opened it in the kitchen sink, 75% of the contents came out in a beer fountain.

Dog A poured pitch black with a minimal tan head. The aroma featured tones of roasted malt, coffee, chocolate and some fruitiness from the chili. The flavor was intensive, featuring roasted malt, coffee, caramel, chocolate and some warming chili tones. The beer had a full body and a surprising amount of carbonation (medium level). It was very drinkable already, but I think it will improve with some aging. Hemel & Aarde was a bit hard to comment on, because of the small amount of beer that remained for tasting. It was also pitch black and no head was formed during pour. The aroma was full of smokey whisky tones and some roastiness. The flavor was similar. The beer had a full body and low carbonation level. Shame about the gusher, since it would have been nice to try more of this beer. The Big Bear Black Stout poured pitch black with a cream-colored head. The aroma was quite light compared to the previous two beers, and it featured tones of roasted malt and coffee. The flavor was also surprisingly light, with roasted tones of coffee and chocolate. A slight tartness was present as well. The beer had a medium body and medium carbonation level. The Sällskapsporter also tried to come out of the bottle when opening, so it poured with a black color and a massive cream-colored head that collapsed quite quickly. The aroma was quite light, with some roasted malt and coffee, together with a slight sourness. The flavor was mostly roasted malts, with a very dry finish and slight bitterness. The body was medium-light with a medium-high carbonation level. I wonder if this was infected as well?

Overall I’m very happy with the evening, as there were some fantastic beers. Personal favorites were Brewdog IPA is Dead Galaxy, Cigar City’s Jai Alai, Green Flash Imperial IPA and Brewdog Dog A.