Yesterday we made some progress on our new mash tun. The basic idea was to construct the mash tun out of two buckets, a 50-litre food grade inner bucket and a 65L cheaper outer bucket. We installed 1/2″ stainless steel fittings between the two bottoms (including a PT100 temperature sensor) and added in a sheet of styrofoam for increased stability and insulation. The inner bucket is now drainable from the bottom. We then filled the space between the two buckets with polyurethane foam for stability and insulation, and left it to dry overnight. We still have to construct a false bottom, which we will make from a stainless steel kettle lid. The lid will get hundreds of 2-3 mm holes drilled through it and stainless steel feet installed on it. We also have plans for buying and installing a Blichmann AutoSparge in the mash tun, to prevent overflowing and allow for a more automated mashing process.

Here is the inner bucket before any modifications.

Drilling a hole for the stainless steel fittings.

Shortening the through-hole fitting with a Dremel.

I’m happy to announce that my review on the formation and control of diacetyl during brewery fermentations has been published in the Journal of the Institute of Brewing. The review covers how diacetyl is formed during fermentation, what factors affect its formation, how it is removed during fermentation, methods for reducing residual diacetyl content in beer and strain development. Please have a read if you are interested! Diacetyl is still a problem for the big lager breweries (and why not the smaller ones as well), and one of the limiting factors for increasing fermentation speed. Even homebrewers are commonly affected by this off-flavour. I’ll be basing most of my diacetyl mini-essay on the review, and I will be posting the second part soon.

It has been way too long since I last reviewed a beer, so I thought I’d try a homebrew I received from Juhani in July. I’ve tried Juhani’s beers several times before and his beers have been really nice. He has tried some strange experiments before, but today’s beer should be a quite ‘traditional’ red ale. Iltakalja, which translates to Evening Beer, should be a perfect beer for a warm summer evening. I don’t have much information about it, but I know that the ABV is 4.5%, the calculated IBUs are 35, and if I remember correctly the beer is hopped with Willamette. The beer was brewed in the middle of May, so it should be at a very good age. I’ve used Willamette some times before, and I think it gives a very pleasant floral hop aroma. Let’s see how it goes in this beer!

[easyreview title=”Kosoolan Panimo Iltakalja” cat1title=”Appearance” cat1detail=”The beer pours with a warm orange-amber color, and when held against the glass it shows some hints of red as well. Maybe a touch light for a red ale? But color is of course not important. A fluffy cream-colored head is formed during the pour as well. However, it collapses relatively quickly. Some patches of lacing are left along the glass and a thin foam layer remains upon the liquid. The beer is quite hazy, despite spending roughly 3 weeks in the fridge, so I suspect either chill haze or dry hop haze. Quite a typical ‘homebrew’ appearance.” cat1rating=”3.5″ cat2title=”Smell” cat2detail=”The aroma is mostly hoppy, and the hop tones seem floral, grassy, spicy and almost soapy. The hop aroma is quite intense, so I assume the beer has been dry-hopped (which would explain the haze as well). The hop aroma is really pleasant, and a nice variety to all the beers hopped with citrus-like hops. Behind all the hop tones you can sense some malt and caramel, which complement the hop tones well. A really nice aroma, and no off-aromas at all.” cat2rating=”4″ cat3title=”Taste” cat3detail=”The taste begins with a slight maltiness and a herby and earthy hoppiness, but the flavors seem to last for only a short time, as they quickly end in a dry and moderately bitter finish. The overall flavor is a little watery and there is a slight minerally aftertaste which gets me thinking of carbonated mineral water (are there any salt additions?). I guess the low ABV% and probably a quite low final gravity, have made this beer quite light and watery. I would have liked a slightly more complex maltiness and firmer body (maybe more speciality grains or a higher mash temp). You can tell that some of the nice hop tones from the aroma are present in the taste as well, but they are quite subdued and could have been slightly more present. I guess some kind of a neutral yeast strain was used for fermentation, as there are not much yeast-derived flavors present either. After the nice aroma the taste is a slight disappointment. No large off-flavors, but the taste is quite watery and the minerally finish is a little disturbing.” cat3rating=”3″ cat4title=”Mouthfeel” cat4detail=”The beer has a light body and a medium-high carbonation level, that together with the minerally finish give the beer a ‘harsh’ mouthfeel. Great as a thirst-quencher a warm summer day, but would have preferred a slight fuller body, as it would probably have benefited the taste as well.” cat4rating=”3″ summary=”Overall, this was an okay beer, featuring a really nice aroma, but a slightly too light taste and body. I don’t know what the purpose of the beer was, but as a thirst-quencher for the summer this was really good. As a ‘drink with food’-beer or a ‘sipping’ beer, this could have used some more flavor and more complex malt backbone. The minerally finish was somewhat surprising, and I’m wondering if any brewing salts were used during brewing? If yes, then perhaps these could be decreased a bit. Thanks for the beer, am looking forward to trying the other two beers brewed by Juhani I have in the fridge!”]

I’ve been using muslin bags for containing hops during wort boiling almost my entire homebrew career, but we were getting a bit tired of either constantly having to buy new ones or having to thoroughly wash them after a brewday. That’s when we decided to build a ‘hop spider’ inspired by the one sold by Stainless Brewing: 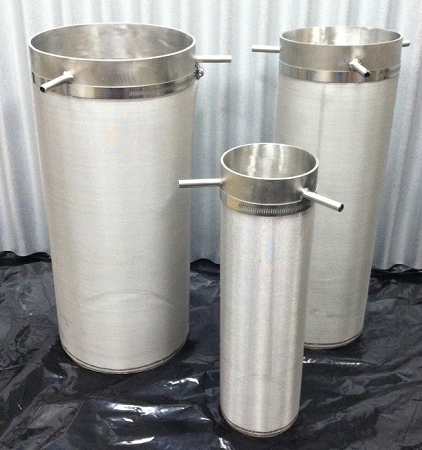 The hop spider is a tube of stainless steel mesh, that at least theoretically should contain both leaf and pellet hops, while still allowing liquid transfer. We had access to large amounts of free 316-grade stainless steel mesh of various mesh sizes and a spot welder, so the hop spider was both an easy build (~2 hours of labor) and, for us, very cheap. We started by cutting out a circular piece of sturdier mesh for the bottom:

After this we cut out the mesh for the sides, and welded it together to form a cylinder (length of 35 cm, diameter of 15 cm):

We then welded the bottom to the cylinder:

Finally we added a ribbon of stainless steel around the upper edge for added strength, and coated the rough edges with silicone tubing to prevent getting cuts. It is not the prettiest, but hopefully it will serve its purpose:

We haven’t tried it out yet, but hopefully it will work fine! It will probably be making its debut with the Black Rye IPA next week! While we were building, we drilled and threaded a hole in a 1/2″ stainless steel plug for a PT100-sensor. This sensor will be placed at the output of our plate chiller, so that we can monitor the temperature of the chilled wort (I can’t believe we haven’t thought of this earlier). This should hopefully let us control the chilling a little better. The sensor will still need to be water-proofed, which we will do with some food-grade silicone.

The fermentation of the Amber Ale we brewed last week seems to have progressed well, and we will be transferring it to kegs in the beginning of next week. Next week we will also try to rebrew the Black Rye IPA we brewed last December, which then resulted in utter failure. Because of the high protein content in the rye and the fact that we were using BIAB back then, a huge amount of trub and break material formed in the wort, causing a thick black burnt crust to form around the heating element. The beer tasted extremely burnt and ashy, and the batch had to be dumped. This time around I hope we succeed better by keeping the grain in a separate mash tun (as we’ve been doing the last 5 batches or so), allowing us to recirculate and clear up the wort, and by stirring regularly during heating and boiling, to prevent any protein material to settle on the element. We will hopefully have our new mash tun ready by then as well, so the ~8kg of grain should easily fit. The recipe has been tuned a little but is basically the same as last attempt:

Yesterday was another brewday, and this time we really pushed our brew kettle to the max. We brewed a 40 liter batch of a 1.050-gravity Amber Ale, meaning that not only was our mash tun quite packed during the mash, but the boil kettle was filled to the brim at the start of the boil. The brewday went surprisingly smoothly and we didn’t even have any boil-overs. We just missed the target OG (1.050), as we measured an OG of 1.049, but I think we gained a couple of liters of extra wort to compensate. The malt bill consisted of Maris Otter, Munich, Crystal 60, Amber and Special B malt, which should give the beer a malty finish (and hopefully some body despite the relatively low ABV). The beer is bittered to around 35 IBU, and featured some Styrian Goldings and Cascade late in the boil. We pitched a 2-litre starter of WLP051 California Ale V, which should hopefully leave some residual sweetness and some fruity tones. Can’t wait to try this one out in a couple of weeks!

We have some plans to update our current mashing tun (a converter cooler), to a 50L mashtun with false bottom, to hopefully allow us to make bigger batches of higher strength beer as well. More about the new mash tun in another post!

There are a couple of days left to vote in the Taisto homebrew competition, and if I haven’t managed to persuade you to vote on us yet, please have a look at our commercial movie:

You can vote for us (Garage Brewery) at this site! All votes are warmly appreciated and thanks to everyone that has voted on us already!

We have brewed a beer for the Taisto homebrew competition, and you can help us get bonus points by voting for us on the competition’s webpage.

Here is a short introduction to the beer (only in Finnish).

To vote, click on the ‘Äänestä’ tab at the top menu, and vote for ‘Garage Brewery’!